Rockwell Scales has been involved in the scale industry since 1980 and been manufacturing their own scales for nearly as long, but our company story is much more than a collection of facts. When you put your name on every job, there’s a bigger picture behind the bottom line.

The Rockwell family’s roots in Montana extend back over 120 years when Nick Rockwell’s great-grandfather, Walter Woodrow, settled in the Sun River Valley. He farmed the square butte and achieved local fame as the first in the valley to purchase one of those newfangled horseless carriages.

His daughter, Mary, married a presumably dashing country boy named Victor Rockwell, who came to the valley after running away from an orphanage as a child. Victor worked on a farm for room and board as a youngster, eventually helping build the infrastructure that shaped the region, like roads, bridges, and the Gibson Dam. Eventually he and Mary bought their own farm and went on to raise 4 children. Among them was Dan Rockwell, Nick’s dad and company founder. 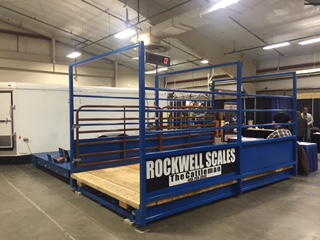 Dan inherited the industrious American spirit and when he returned from his tour of duty in the Navy, secured a position as a foreman on the great Alaskan pipeline. Afterwards he became a manager of Glacier National Park. He invested in real estate and bought a local business in Great Falls, Montana

However, Dan Rockwell was not immune to the housing crash of the late 1970’s.

After enduring hardships in his real estate ventures he created The Great American Salvage Corporation, tearing down grain elevators and selling the components. His customers continually asked him to install the scales he took out of those grain elevators and Dan learned just how crucial a reliable scale is. He hired a skilled technician to teach him the ins and outs of mechanical scales and taught himself about new electronic weighing systems. He initially sold and installed scales for a large national manufacturer, though they would soon demonstrate a lack of loyalty by undercutting Dan and selling directly to his customers.

“I bet I could build a better scale anyway,” was Dan’s response. So he did!

His son and now company President, Nick, takes after his father, grandfather, and great grandfather. Always building something, building it better, and learning along the way.

Nick began working for his dad at the age of 13, was welding tuna cans to plate steel at age 8, and demonstrated an unfailing work ethic even earlier. Dan’s first employee was sitting on a 5-gallon bucket smoking a cigar when Nick (who was only about the size of that bucket) asked, “Shouldn’t you be working?”
That employee, still recovering from his laughter, told Dan, “That damn kid is just like you!”
Nick bought the business in 2009, reincorporating it as Rockwell Scales, Inc. That year, Rockwell Scales had scales in 4 states and 2 countries. Today, we have scales in 25 states and 3 countries.

Success follows from the belief that the highest quality American-made scale shouldn’t break the bank or be designed to last only past the warranty. Nick Rockwell’s name is on this company, and his name is its stock. He’s dedicated to continuing America’s legacy of manufacturing the highest quality products in the world. That’s not just a tagline. We back it up with a 20 year structural warranty, the longest in the industry. Made in Montana means built to withstand extremes, and we have never had a structural failure. They’re not just tough; they’re Montana-tough!

Nick lives in Great Falls, Montana with his wife, Ann, and two children, Victor and Bella